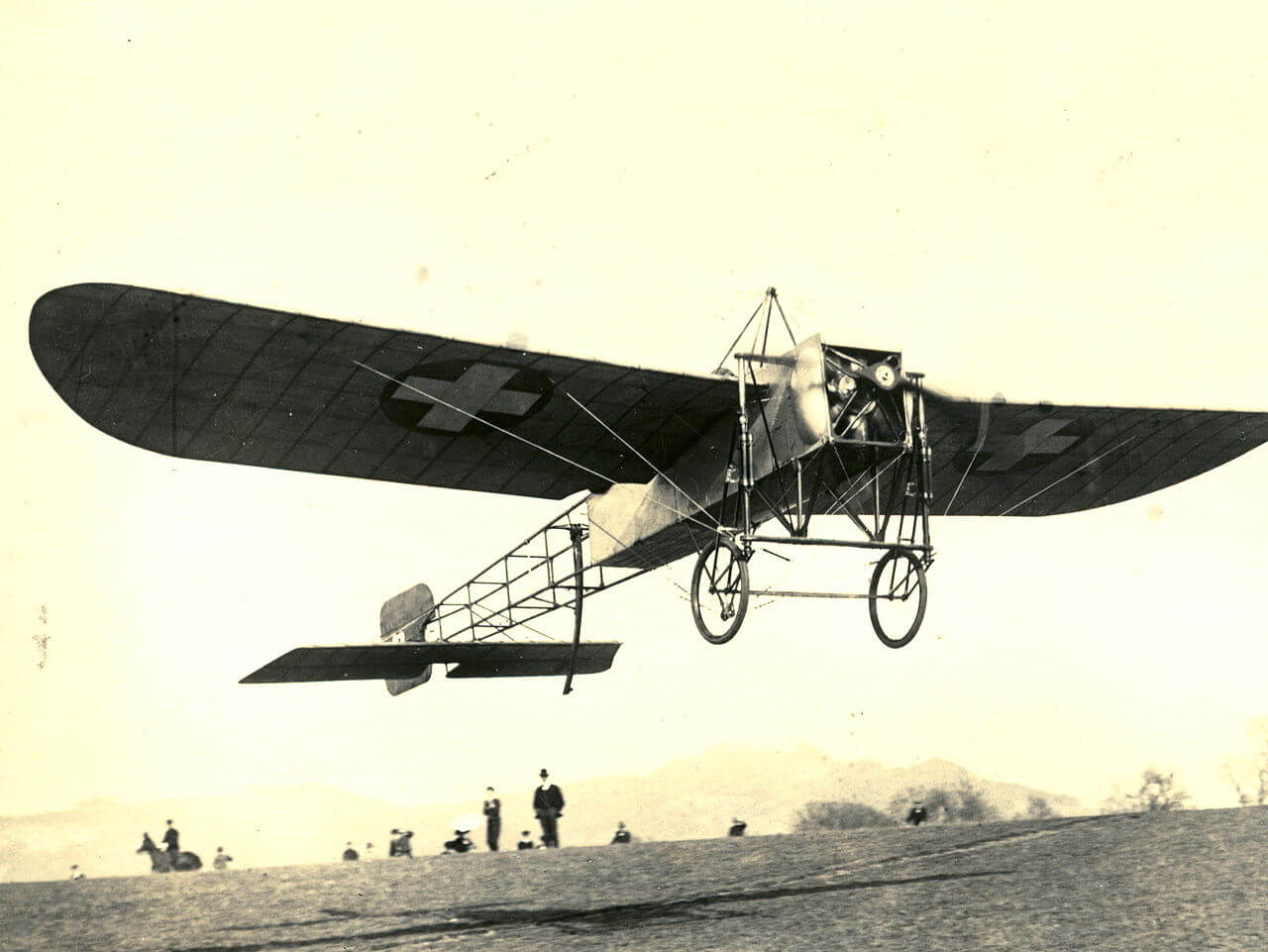 If you wished to study aerodynamics, you would only need to look at the very early aircraft designs, such as the Bleriot XI. There are no high bypass ratio turbofans, nor upper deck lounges, nor global positioning systems. Instead, the aircraft is a sheer expression of the design solutions needed to overcome the four forces of flight: lift, weight, thrust, and drag. One of these “studies” can be made at Cole Palen’s Old Rhinebeck Aerodrome in Rhinebeck, New York.

The culmination of ten previous configurations built by Louis Bleriot, who had reinvested 60,000 French francs amassed during an automobile lamp manufacturing venture to develop a technologically successful airplane in a race with such names as the Wright Brothers, Henri Farman, Santos Dumont, and Glenn Curtiss, the Bleriot XI itself had become the world’s first practical monoplane.

The Bleriot VII, providing its initial foundation, had appeared with a partially enclosed fuselage to house its single pilot; wings braced to a tubular cabane framework over the cockpit; a four-bladed, 50-hp Antoinette engine; a large, dual-elevon horizontal tail; a small rudder; and swivelable, independently-sprung wheels. Although it crashed on December 18, 1907, it had nevertheless provided the foundation for a later, definitive design.

The Bleriot VIII, rapidly following, had retained the low-wing configuration, but had featured pivoting, wing tip ailerons and a tricycle undercarriage, each comprised of single wheels.

Its long, gradually-tapering fuselage, formed by ash longerons, spruce uprights, and crossbeams held together by wire trusses, had been light, yet strong, and provided the common attachment point for its aerodynamic surfaces and engine. Only half covered by fabric, it appeared primitive and unfinished, but functional.

Fabric-covered, rib-formed wings, with rounded tips, featured a 28.2-foot span and 151 square-foot area and were joint-attached to the fuselage at an angle, offering considerable dihedral. Their upper surface camber and sharply drooped leading edge were themselves expressions of aerodynamics. Closely guided by their upper surfaces, airflow sloped downward and beyond their trailing edges, reducing upper surface pressure, increasing the airflow’s speed, and causing the airfoil to “react” in the principle of lift. Neither high-lift devices, such as slats and flaps, nor even ailerons, had been included. Instead, lateral control had been provided by the Wright Brothers’-designed wing warping method, an inverted pylon attached below the fuselage providing wire attachment for warping actuators. Differentially twisting the entire wing, they transformed it into a huge aileron, increasing its angle of incidence and inducing inflight bank.

A rectangular-shaped, 16-square-foot stabilizer, mounted beneath the tapered structure toward the end, provided deflection for pitch axis control, while a 4.5-square-foot, all-moving rudder, seeming minuscule for the aircraft, provided yaw control at the extreme end of the fuselage.

A three-cylinder, air-cooled, inverted-Y, 35-hp Anzani engine, replacing the design’s original, 30-hp REP powerplant and attached to a forward, ash frame, drove a mahogany, scitmar-shaped, 6.87-foot-diameter propeller at 1,350 rpm. Because of the then inadequate power capability of existing engines, the Bleriot XI, like all early designs, had wrestled with power-to-weight ratios, their designers forced to counteractively use strong, but light wood for structures and fabric for aerodynamic surfaces.

The smooth, finely sanded, intricately shaped propeller itself had been a combination work-of-art carving and aerodynamic expression. Essentially a tiny wing, rotating perpendicular to the path of flight, it developed thrust the same way a wing created lift, the relative wind striking it at its plane of rotation. Because it had been set at an angle of attack, and because it had a camber-shaped airfoil, it developed lift in a forward direction, redefined here as “thrust,” the propeller’s “twisting” enabling it to retain the same angle-of-attack along its radius with its pitch angle high near its hub, but low near its rim.

The forward, ash frame had equally provided the attachment point for two of the aircraft’s three finely spoked, swivelable, rubber tired wheels, whose periodic tape wrappings ensured adherence between the tire and the rim. The undercarriage’s unique, swivel capability, tracing its origins to the Bleriot VII, more adequately enabled the aircraft to operate during crosswind field conditions, since the tiny rudder had offered insufficient area to counteract these to any appreciable degree and the assemblage had been otherwise too frail to structurally withstand side loads. As a result, it had been able to track across the ground at an angle.

The cockpit, formed by a wooden frame and rubber fabric on its sides, featured the Bleriot-designed control system in which a small, circular, non-turning wheel had been mounted atop a vertical post which had been based by a round, metal, half-dome “cloche,” or “bell” in French, to which the two forward and back elevon-actuating and two side wing-warping cables had been attached. Surfaces had been moved by pitching the stick forward, backward, or to either side. Cockpit “sophistication” had been completed with an engine throttle on the right side and two instruments: a compass and a fuel quantity indicator.

A small, barrel-like fuel tank had been horizontally installed between the engine and the cockpit.

The Bleriot XI, as powered by the 35-hp Anzani engine, had featured a 661-ppund gross weight and could attain 47-mph speeds.

First flying on March 15, 1909, with the earlier REP powerplant, it had only hopped an 8,200-foot distance, but this inauspicious beginning had hardly been indicative of the design’s performance and success, since only four months later, on July 25, it had made the record-breaking, 25-mile, first cross-channel flight from Calais, France, to Dover, England, winning the Daily Mail’s 1,000 British pound prize for the feat. The historical event, generating worldwide attention, sparked an influx of orders for the type.

The Bleriot XI’s design, low horsepower, and minimally effective surfaces dictate its operation. The brake-devoid aircraft, for example, can only be directionally controlled by its tiny rudder on the ground. Take off, because of the wing’s high angle-of-incidence, is optimally achieved with a full cloche, or throttle, advancement, which raises the tail to a ground-parallel position and places all of the aircraft’s weight on its main wheels, while wind-induced tracking angles can be partially or fully counteracted by rudder deflections, depending upon their degree, and its swivelable undercarriage further augments this. So profiled, the aircraft is induced into a shallow climb. The wing’s camber and area, coupled with ground effect, temporarily aids this, but it still has abrupt stalling characteristics.

The step-climb profile, dictated not by air traffic control restrictions, but instead by speed requirements, generates lift at each “plateau.”

Despite full throttle setting needs to retain maximum flow over the engine in order to meet its “air-cooled” requirements, the slow, frail design is susceptible to wind gusts, and banks should be shallow and gentle. Power is not sufficiently available with which to counteract the 30-degree-and-above turns which exponentially increase wing loading and inevitably lead to stalls. Lateral, wing-warping control is minimal and sluggish.

Full-power, nose-down descents are ideally arrested with throttle reductions just before the wheels touch the ground. Earlier power reductions are, because of the inadequacy of engine power, unarrestable, and pre-landing overflaring will force the airframe onto its tailskid.

The Old Rhinebeck Aerodrome Bleriot XI, of construction #56, is the oldest still-flying airframe in the US, eclipsed only by the Shuttleworth Collection’s Bleriot, which bears construction #14.

Having crashed during a 1910 air meet in Sauguss, Massachusetts, the Rhinebeck example had subsequently been acquired by Professor H. H. Caburn, who had passed it on a daily basis while cycling to work and who had stored it, until it had been given to Bill Champlin of Laconia, New Hampshire. Onwardly donated to Cole Palen in 1952, it had been devoid of its engine and aerodynamic surfaces, but its front and rear third had been otherwise complete. Newly constructed wings, a horizontal stabilizer, and a rudder had been fitted at Stormville Airport two years later, in October.

Because of the aircraft’s fragility, it is restricted to “short hops” from Old Rhinebeck’s rolling grass field during Saturday “History of Flight” air shows, having only attained a maximum altitude of 60 feet. Nevertheless, this short hop of an elegantly simple expression of aerodynamics traces its origin to, and therefore represents, the then “long distance” across the English Channel which the original Bleriot XI had made a century ago as the world’s first practical monoplane and predecessor to every modern aircraft which now routinely links the globe.

A graduate of Long Island University-C.W. Post Campus with a summa-cum-laude BA Degree in Comparative Languages and Journalism, I have subsequently earned the Continuing Community Education Teaching Certificate from the Nassau Association for Continuing Community Education (NACCE) at Molloy College, the Travel Career Development Certificate from the Institute of Certified Travel Agents (ICTA) at LIU, and the AAS Degree in Aerospace Technology at the State University of New York – College of Technology at Farmingdale. Having amassed almost three decades in the airline industry, I managed the New York-JFK and Washington-Dulles stations at Austrian Airlines, created the North American Station Training Program, served as an Aviation Advisor to Farmingdale State University of New York, and devised and taught the Airline Management Certificate Program at the Long Island Educational Opportunity Center. A freelance author, I have written some 70 books of the short story, novel, nonfiction, essay, poetry, article, log, curriculum, training manual, and textbook genre in English, German, and Spanish, having principally focused on aviation and travel, and I have been published in book, magazine, newsletter, and electronic Web site form. I am a writer for Cole Palen’s Old Rhinebeck Aerodrome in New York. I have made some 350 lifetime trips by air, sea, rail, and road.