The Bombardier name is one that only echoes stories of quality and pedigree in the minds of people who know enough about private aviation. A Canadian company by origin, Bombardier has reached the very heights of not just private aviation manufacturing, but also public transport vehicles, trains, and even recreational vehicles. In fact, the company first started out producing snowmobiles, armed with an incredibly revolutionary design, and swept the market. These snowmobiles were made in mind the weather conditions of Canada, where heavy snowfall would ensue in the winter, making many places completely inaccessible through any other modes of transportation. These snowmobiles, on the other hand, would be able to cruise over most snowed-in land with the greatest of ease. In 1948, the government of Quebec passed a law where it was required by law to completely clear all roads of snow. All of a sudden, there was no need for snowmobiles, and Bombardier’s sales fell by nearly half.

For most companies, that is the end of the road. Keep producing the one product you have until it simply isn’t needed anymore and then prepare to fade into antiquity in the form of a few lines of a Wikipedia page. However, Jospeh-Armand Bombardier wasn’t going to give it up that easily. He decided to diversify his business into many different things, some of which we have already mentioned. In 1986, long after the death of the founder, Bombardier decided to go into aviation and the result is a long list of aircraft that have ruled the skies ever since. Today, we are going to be talking about the Bombardier Global 6000, one of the most glittering names in the Bombardier lineup.

The Bombardier Global 6000 belongs to the Global Express family, which has been around since the 1980s. The Global 6000, which we are referring to, came around in 2012. The name Bombardier Global 6000 is a reference to the amazing range of the aircraft, which comes in at around 6000 nautical miles. This means that the aircraft can be in the air for about 12 hours without a single stop. An ideal trip for the Global 6000 would be Mumbai to London, which it will be able to cover without stopping for a single fuel break. The aircraft’s range puts it comfortably into the intercontinental long-range jet section. The total sales of the aircraft are around 300 in number, which is extremely impressive, considering that this aircraft caters to a niche section of the ultra-rich.

The jet can cruise at a speed of 564 miles per hour and has a certified ceiling that allows it to fly higher than most commercial jets. This is mainly due to the extremely strong body of the aircraft, which allows it to withstand the pressure of external forces even at a high altitude of 51,000 feet.  The Rockwell Collins Proline Fusion avionics suite flight deck is one of the standout features of the Global 6000. It allows the pilots of the jet to have a greater amount of visibility into the surroundings as well as the workings of the jet itself, creating an environment that is much safer for everyone involved. If you are the daredevil type and want to push this amazing jet to its absolute limits, the top speed you should be looking to achieve is about Mach 0.89, which is mighty impressive for a jet of this size.

The jet can accommodate 8 to 19 passengers depending on different arrangements and requires at least 2 pilots. A new Global 6000 will cost you about $60 million, which is quite a large sum but is in line with other competitor aircraft. In the used market, you will be able to find the aircraft for about $50 million. The cost of operating this aircraft per hour comes to around $8600, which is a massive sum and doesn’t include the cost of renting it.

The interior of the aircraft is quite luxurious, as one would expect when you are paying the equivalent of a small nation’s GDP for an aircraft. The cabin is about 48 feet long, 7 feet wide, and 6 feet high. If you are a tall person and have been on a private jet before, there is a good chance that you needed to walk hunched down because the ceiling of the jet itself was not nearly as high. However, in this aircraft, you would have the chance to walk upright if you are not too tall. The cabin, when it was first introduced to the market, was the single biggest put in any private jet ever. However, the claim was quickly trumped by the G650 in barely a few months. However, if you do end up deciding to buy one, it should make you very happy that you have a jet that was once at the very top of that hill.

The cabin management system is completely wireless through the use of an intricate system that allows you to completely control the aircraft from the comfort of your own seat. The aircraft has three cabin zones as well. These include the forward galley and a very respectable lavatory at the back of the cabin. The owners are also allowed the choice of different cabin layouts as well, including one that is known as the stateroom. The child in you thinking about how cool a stateroom will be to have on a private jet is already jumping up and down with joy. 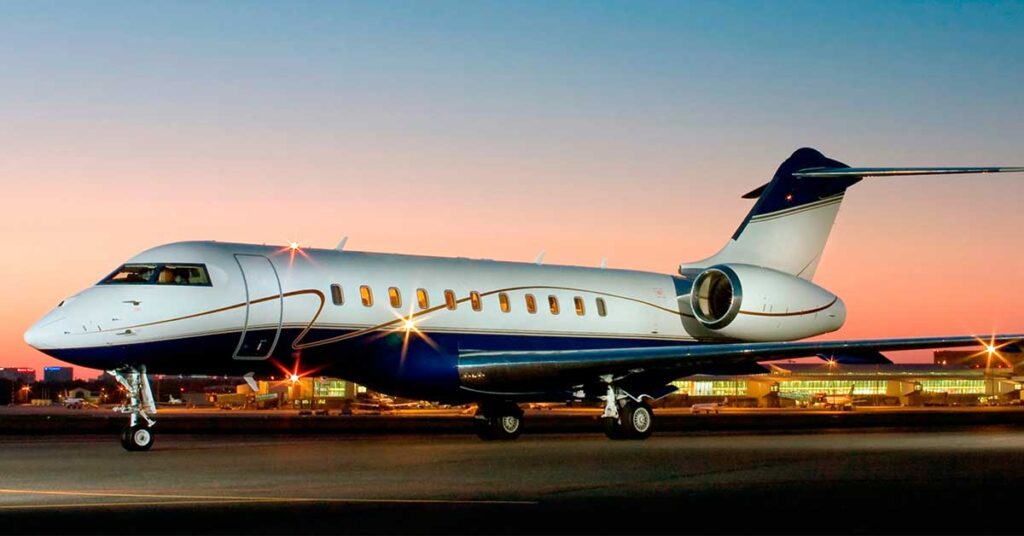 The exterior of the jet is as impressive as it is expected to be. Looking at it parked on a runway is truly a sight to behold. The aircraft seems to be able to suck all the attention to itself even if there are other aircraft around it. The exterior height of the aircraft is 25 feet and 6 inches. What is truly astounding is the wingspan of the aircraft, coming in at about 94 feet. The length of the entire body of the aircraft is nearly 100 feet, which really makes it quite a massive aircraft. The words ‘Global 6000’ are etched on the tail of the aircraft, telling everyone that they are not looking at a run-of-the-mill private jet. What they are looking at is one of the most refined experiences in the world of private jets ever. This is what truly makes it so amazing. If you are not willing to pay the massive price of entry for this aircraft, there are other options as well that help you experience the greatness of this aircraft without paying the full price. Through fractional ownership, you can essentially own a part of the aircraft along with a bunch of other owners. You could own 1/8th of an aircraft, or 1/4th or 1/16th and the privileges that you are allowed inside the aircraft will also be proportional to that as well. The mechanics of this work in such a way that you buy a stake in a holding company that owns the aircraft. Whatever your stake or fraction of ownership is in the holding company, that is equivalent to your ownership of the aircraft itself. Most people who fly less than 250 hours a year don’t really need an aircraft, so buying a fraction of a share in one is a much better investment in all honesty.

This is the story of the Bombardier Global 6000, still a favorite in the private jet charter market. Considering that the jet was only launched 10 years ago (which isn’t a lot of time in the world of private aviation), we can safely consider the possibility that there are a lot of nautical miles left in this private jet yet. So, the best part about this story is that this one is still ongoing.