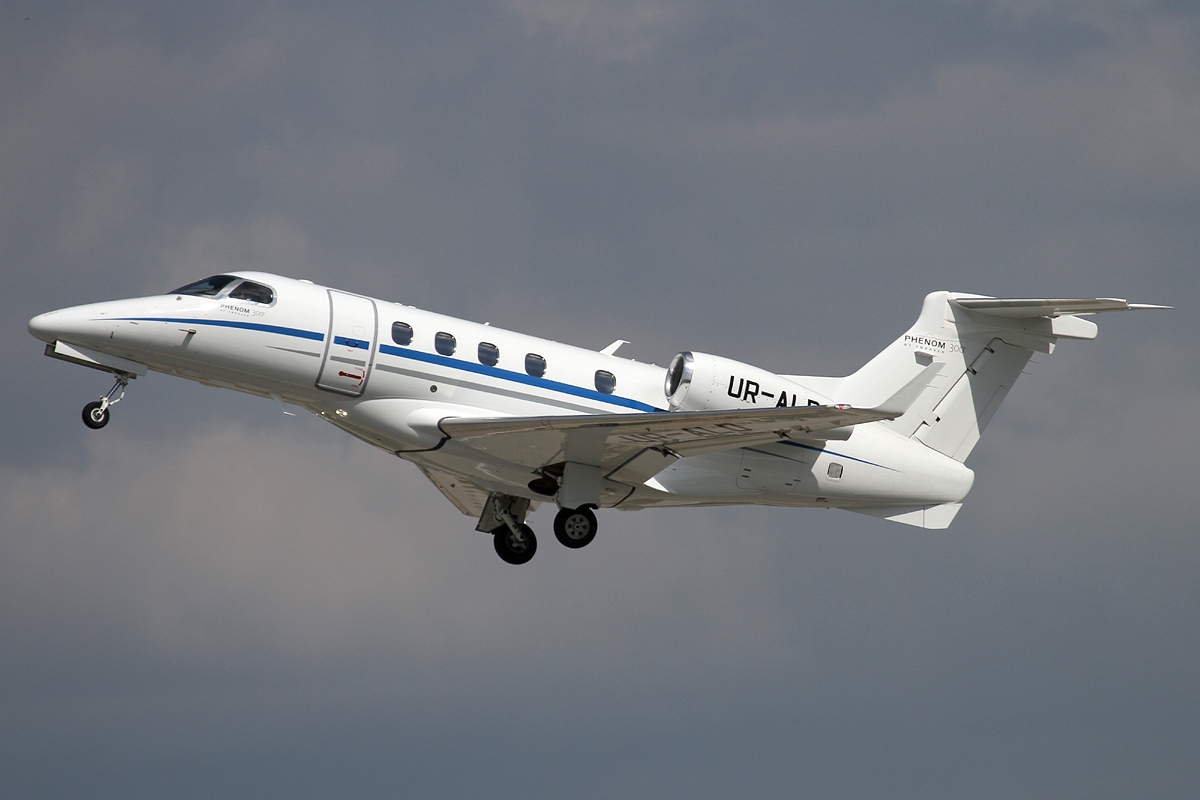 When it comes to punching above its weight, there is no jet that personifies this attitude better than the Embraer Phenom 300. Made by a Brazilian manufacturer who is considered by many to be the best in the business in the modern era, the Phenom 300 is one of their most famous exports. In fact, they delivered the 600th unit of this popular light aircraft in May 2021.  The cost of the jet to the customer comes in at around $10 million per unit. While this may seem like quite a big number, the Embraer Phenom 300 provides the best bang for your buck in this particular class. What is perhaps the biggest plus point of this jet is the fact that it has a passenger capacity of 9 people, which is certainly class-leading for a light jet. Private jets capacity is a topic that can get confusing. There are much larger midsize jets that can house the same number of people as a light jet like the Phenom 300.

Released in 2009 as part of Embraer’s bid to conquer the light jet market. It is one of the fastest aircraft that can be piloted by a single person. The initial vision of the Phenom 300 was to provide an aircraft to customers who thought that the Phenom 100 was too small for their needs. Due to its size and exemplary technology, the Phenom 300 can land in smaller airports like the London City Airport. The 2020 update of the Phenom 300 gave the aircraft a little bit more muscle as well, such as the top speed being increased from 0.78 Mach to 0.80 Mach. More importantly, the aircraft now has a range of 2010 nautical miles which is over 3700 kilometers, making sure that the Phenom 300 can go on longer flights.

Luxury In A Smaller Package: Private Jet Interior Of The Phenom 300

Embraer is a maker that was primarily known for the larger jets in its fleet before the 2000s. All that was changed by the introduction of the Phenom 100 and Phenom 300. The Phenom 300 is known for its efficient use of space. The maximum passenger capacity of 9 can be changed to 7 for a more comfortable experience for the passengers aboard the aircraft. The length of the cabin comes in at around 17.16 feet, which is quite healthy for a light aircraft. The width of the aircraft is just slightly over 5.1 feet. As is the case with all light jets, you will not have the luxury of an upright cabin. The height of the cabin is about 4.9 feet, which is in line with other jets in its class.

Embraer has very successfully been able to transfer the soul of their larger jets into the Phenom 300. It has a class-leading interior with materials of the highest quality being employed in order to provide passengers with a truly unmatched experience. The baseball stitching on the seats is complemented by the two-tone design on the seats, setting the tone for the rest of the interior. The design overall is the perfect blend of class and elegance, making sure that the colors sway more to the side of sleekness. People who spend their meetings in million-dollar boardrooms will feel right at home in this jet. Despite the fact that the Phenom 300 has a greater-than-average passenger capacity, it still is able to provide more leg and elbow room than its prime competitor, the Citation CJ3.

The larger windows of the aircraft mean that sunlight exposure in the cabin is quite high. The classy design is further complemented when the sun decides to add its filter to the view. Making sure that passengers are fully comfortable in the interior, the Phenom 300 has a sophisticated cabin air management system that only allows fresh, cooled, and conditioned air to enter the cabin. Even at thousands of feet in the sky, passengers seated in the Phenom 300 will not face any breathing problems, thanks to the clean air that the jet provides.

When it comes to design and styling, the lion’s share of the effort goes to the interior of the aircraft. After all, you are going to spend all your time inside the jet rather than outside. However, Embraer has exemplified its attitude of creating a package that is well-rounded from every angle. The exterior design of the aircraft can be described as conventional yet unique. All the design features are dedicated to providing balance to the design of the aircraft, with no features such as the tail or wings looking out of place. The Phenom 300 name makes an appearance on the tail of the aircraft, with the sizing of the letters being pitch perfect. They are big enough to be noticed and read from a distance but do not go overboard, averting the risk of the styling looking too showy.

The exterior design feels like a continuation of the interior, blending seamlessly when you take a step outside of the aircraft. Both the interior and the exterior are understated and elegant in their feel. The lower-positioned wing is one of the best examples of great design being combined with aeronautics. This allows the jet to reduce turbulence even when going close to its top speed.

What Is the Charter Cost of the Embraer Phenom 300?

In the end, it is all about the value the product is able to provide. Embraer understands this completely, with the $10 million price tag of the Phenom 300 providing great value. Consequently, for a jet that can transport 9 passengers at once in absolute luxury, the charter cost per hour (to learn more about charter costs of jets, here is an article) of the Embraer Phenom 300 comes in at about $3300 to $4000 per hour. Note that these numbers can vary greatly on a host of different factors such as the model year of the aircraft or the demand in that particular period of time. A newer Phenom 300 that has been chartered in a busy holiday season will cost a lot compared to an older one chartered on relatively less busy days. It is important to understand this information in the context of the passenger capacity of the Phenom 300. A fully filled Phenom 300 will cost anything from $350 to $450 per hour for one passenger. To put this information into context, a one-hour and 15-minute-long return flight from Paris to London in first-class could go as high as $9000. You are paying this amount for a total flight time of 2.5 hours. The calculations I will leave for you.

The Phenom 300 is one of the most balanced aircraft available in the market, let alone the light jet market. The blistering sales of this aircraft have allowed Embraer to become the best-selling private jet aircraft company in the entire world during the 2000s. With the Phenom 300 fan club only growing by the day, this jet is not ready to be grounded anytime soon.